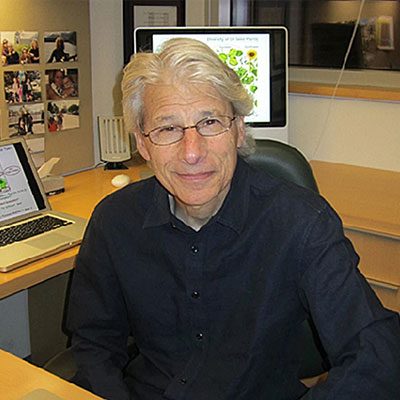 During the next 50 years, we need to produce more food than in the entire history of humankind on a decreasing amount of land for crop production. A major challenge for the 21st century is to increase the yields of major crop plants, such as soybean, using state-of-the-art genetic technologies. One way to accomplish this task is to use genomics to understand all of the genes required to “make a seed” in order to engineer plants for yield traits such as more seeds, bigger seeds, and seeds with improved nutritional composition. Increasing seed yield should contribute significantly to enhancing our food supply, because over half of the major crops used for human consumption are seed crops. My laboratory has been investigating gene activity during seed development in order to identify the genes and gene regulatory networks required to program seed development. We have been using laser microdissection (LCM) and GeneChip microarray experiments to profile the mRNAs present in every soybean and Arabidopsis seed compartment (e.g., embryo, endosperm, seed coat), region (embryo proper, suspensor), and tissue (e.g., inner integument, endothelium, seed coat epidermis) throughout seed development. For example, what are the genes that are active in different embryonic regions shortly after fertilization (i.e., embryo proper, suspensor)? The genomes of both Arabidopsis and soybean have been sequenced and techniques to dissect gene function in both plants are well established. The focus of our experiments is to identify transcription factor genes that program differentiation events during seed formation. We are complementing our experiments by using high throughput sequencing, RNAi knock-down, promoter dissection, and bioinformatic experiments in order to determine how genes active in different seed parts are organized into regulatory networks that program seed development. The long-term goal of research being carried out in my laboratory is to understand “how to make a seed” in order to use this information for the improvement of crop plants.

Bob Goldberg is a plant molecular biologist who specializes in the area of plant genomics. The goal of his research has been to understand how plant cells differentiate and how genes are activated selectively in specialized cell types during plant development. Professor Goldberg’s research has provided a conceptual foundation for the processes that regulate gene expression in higher plants. In collaboration with others, he utilized genes identified in his laboratory to develop a novel system to genetically engineer for male fertility control in crop plants. This system was used to develop new hybrid varieties of canola plants that have significantly increased yields of oil. His current research is using state-of-the-art genomics technologies to identify all of the genes required to make a seed. Professor Goldberg received a B.S. in Botany at Ohio University, and M.S. and Ph.D. degrees in Plant Genetics from The University of Arizona. Professor Goldberg was a Postdoctoral Fellow at the California Institute of Technology and joined the UCLA faculty in 1976. Professor Goldberg served twice as Director of the Plant Genetics Program at the USDA, has been on the Editorial Boards of many internationally recognized journals such as Science, and was the Founding Editor and Editor-In-Chief of The Plant Cell, the leading journal in the area of plant molecular biology. He has been the organizer of many major international plant molecular biology meetings, is the Director of The Seed Institute - an intercampus institute without walls within the University of California dedicated to unraveling the processes that control seed development. Professor Goldberg has given hundreds of lectures on his research world-wide, and has received several awards recognizing his contributions to the field of plant molecular biology. These include election to the National Academy of Sciences, the National Order for Scientific Merit from the President of Brazil, being named as a UCLA Faculty Research Lecturer, and being listed as making one of the “top 15” Discoveries in UCLA’s 75-year history. Professor Goldberg is highly committed to undergraduate and graduate education and is an “expert” in making science “come alive.” Professor Goldberg has received Distinguished Teaching Awards from the Department of Biology and the Department of Molecular, Cell, and Developmental Biology, and was awarded the Luckmann Distinguished Teaching Award from the Academic Senate. He has also been awarded the Gold Shield Prize for Excellence in Research and Undergraduate Education by the Academic Senate and was named as one of the “top 20” Professors in UCLA’s 75-year history. Recently, Professor Goldberg was awarded a Howard Hughes Medical Institute University Professorship with the goal of expanding undergraduate opportunities in discovery-oriented research.