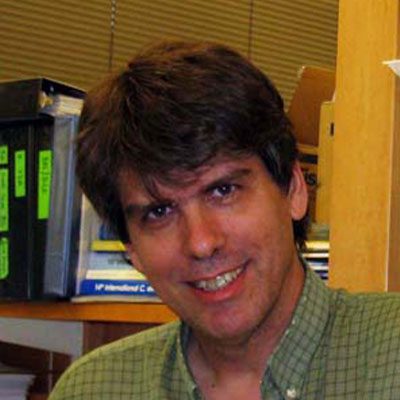 Mitochondria are often depicted as sausages floating in a sea of cytoplasm. This popular image was overturned by studies of mitochondria in live cells. Time-lapse photography shows many instances of mitochondria dividing or fusing with other mitochondria. Frequent fission and fusion events cause dramatic variations in lengths from small mitochondrial fragments to large connected webs. This dynamic view of mitochondria raises many interesting cell biological questions, which have become the focus of our research. We discovered that a member of the dynamin family of large GTP binding proteins is required for mitochondrial fission. This dynamin-related protein, named Drp1, is important for normal development, but it also contributes to apoptosis. A major goal of research in our lab is an in-depth understanding of the molecular mechanisms of mitochondrial fission. We focus on the interplay between Drp1 and accessory proteins and on a novel Drp1-independent pathway for mitochondrial fission. In a second line of research, we focus on the functions and regulation of OPA1, which is another dynamin family member, but this one mediates fusion between mitochondria and it helps regulate cytochrome c release from mitochondria during apoptosis. Mutations in OPA1 cause dominant optic atrophy, which is a form of hereditary blindness that occurs through progressive loss of retinal ganglion cells. OPA1 also helps determine whether defective mitochondrial fragments fuse with other mitochondria, which is important for maintaining a healthy mitochondrial network and for diseases such as Parkinson’s. We are focusing on proteolytic regulation of OPA1 and on the mechanisms of OPA1 pathogenesis. Different members of our lab use C. elegans or cultured mammalian cells to study the fission and fusion processes. C. elegans is used for its wonderful genetic tools and mammalian cells are used for their wealth of biochemical tools. We are currently funded by the NIH and are actively seeking to expand the lab with new students and postdocs. For more information, see our website at vanderblieklab.com.

Dr. van der Bliek studied Biology as an undergraduate at the University of Amsterdam. In 1988 he obtained a Ph.D. for studies of multidrug resistance and gene amplification in mammalian cells. These studies were conducted at the Netherlands Cancer Institute under supervision of Dr. Piet Borst. Dr. van der Bliek then worked as a postdoctoral fellow in the lab of Dr. Elliot Meyerowitz at Cal Tech. While there, Dr. van der Bliek discovered the role of dynamin in endocytosis, first in Drosophila and then in mammalian cells (collaboration with Dr. Sandra Schmid at Scripps). In early 1993, Dr. van der Bliek joined the Department of Biological Chemistry at UCLA where his laboratory has maintained an interest in membrane biology with a focus on the cell biological functions of dynamin family members. The lab initially studied the roles of classic dynamins in C. elegans and mammalian cells. In 1999, the van der Bliek lab (and others) discovered the role of dynamin-related proteins in mitochondrial fission. In the following years, the lab has continued to look for novel proteins that are part of the fission machinery. This search recently led to the discovery of a novel mitochondrial fission factor called MFF. In parallel, the lab has investigated the roles of dynamin-related proteins in fusion between mitochondria. This second line of research led to the discovery of enhanced sensitivity to reactive oxygen species in cells lacking fusion proteins and the discovery of a proteolytic cascade controlling mitochondrial fusion in mammalian cells. These findings have relevance for a range of human diseases, including cancer (through apoptosis), eye disease, and Parkinson’s disease.