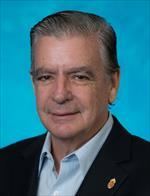 UC Profile
Edward De Robertis is the Norman Sprague Professor of Biological Chemistry. He studies morphogen gradient formation in early development and in cancer. His work defined the Chordin/BMP/Tolloid signaling gradient, and the role of membrane trafficking in the generation of the Wnt canonical signal. De Robertis is a member of the National Academy of Sciences, the American Academy of Arts and Sciences, the Academia de Ciencias de America Latina, EMBO, and the Pontifical Academy of Sciences of the Vatican.

Edward De Robertis studies how long-range cell communication between the dorsal and ventral sides of the embryo occurs through the diffusion of growth factor antagonists. The discovery of Chordin, a BMP antagonist, provided a new paradigm in which facilitated diffusion of a morphogen takes place in the narrow extracellular space that separates the ectoderm from the endomesoderm. This gradient is further integrated with Wnt signaling through the sequestration of the enzyme GSK3 inside multivesicular endosomes.

Within the organism cells do not lead individual lives. They differentiate, proliferate, and die as part of groups of hundreds or thousands of cells called morphogenetic fields, which have the remarkable property of self-regulating pattern after perturbations such as bisection. The aim of our research is to discover the molecular mechanisms by which self-regulation works.

Spemann’s Dorsal Organizer A foundation for understanding self-regulation was provided by an experiment carried out by Spemann and Mangold more than 80 years ago involving grafting of the dorsal lip region of the amphibian embryo. They found that a small group of cells, called the organizer, is able to induce Siamese twins, including a complete central nervous system (CNS), in neighboring cells. Hans Spemann received the 1935 Nobel Prize in Physiology or Medicine for this discovery of embryonic induction. Isolating the molecules involved in these cell-cell inductions has been the Holy Grail of embryology. Using the frog Xenopus, we have isolated multiple genes that encode secreted proteins expressed specifically in Spemann’s organizer. Studies on Chordin, Cerberus, Frzb-1, and Crescent have contributed to the current realization that growth factor antagonists secreted into the extracellular space mediate the formation of embryonic signaling gradients.

Dorsal-Ventral Communication The entire embryo participates in the dorsal-ventral (D-V) morphogenetic field. Chordin is produced dorsally and another secreted protein, Sizzled, is expressed in the ventral side. We used molecular cloning and biochemical methods to unravel a network of Chordin-interacting proteins that form a self-regulating gradient of BMP activity. Key components are dorsal and ventral BMPs as well as Tolloid, a protease that we found specifically cleaves Chordin, releasing active BMPs in the ventral side. Sizzled and BMPs bind to Tolloid and inhibit its rate-limiting enzyme activity. Self-regulation results from the dorsal and ventral centers being under opposite transcriptional control: when BMP levels are lowered, production of dorsal ADMP and BMP2 is increased; at high BMP levels, feedback inhibitors such as Sizzled dampen the signal by inhibiting the degradation of Chordin.

The Chordin Gradient In the ectoderm, BMP inhibition causes differentiation of CNS, and high levels of BMP signaling induce epidermis. In the mesoderm, at low levels of BMP signaling notochord is formed, and at progressively higher levels kidney, lateral plate mesoderm, and blood tissues are induced. Thus, histotypic differentiation in the vertebrate embryo depends on the graded activity of BMP. Remarkably, the three germ layers respond coordinately to changes in BMP signaling. A key question is whether a single signaling gradient or multiple ones are used to pattern the cell differentiation of the different germ layers. We developed a novel immunolocalization method to follow the distribution of endogenous Chordin during Xenopus gastrulation. Chordin protein secreted by the dorsal Spemann organizer was found to diffuse along a narrow region that separates the ectoderm from anterior endoderm and mesoderm. This fibronectin-rich extracellular matrix (ECM), called Brachet’s cleft in Xenopus, is present in all vertebrate embryos. Chordin forms a smooth gradient that encircles the embryo, diffusing over a distance of 2 mm in this signaling highway between ectoderm and mesoderm. After embryo bisection or transplantation of an organizer, the gradient self-regulates. Chordin must reach very high concentrations in this narrow space. It appears that as ectoderm and mesoderm undergo morphogenetic movements during gastrulation, cells in both germ layers read their positional information from a common Chordin/BMP gradient in ECM.

Integrating BMP and Wnt Signaling The Chordin/BMP biochemical pathway explains cell differentiation along the D-V axis. However, embryonic morphology is also regulated by other morphogens, such as Wnt and fibroblast growth factor (FGF). How are these signaling pathways integrated seamlessly in the embryo? Wnt signals by inhibiting a protein kinase called glycogen synthase kinase 3 (GSK3), but the mechanism by which this occurs is unclear. While investigating the BMP transcription factor Smad1 phosphorylation by GSK3, we discovered a novel cellular mechanism for cell signaling. Upon Wnt signaling, cytosolic GSK3 binds to the Wnt receptor complex, which consists of the Frizzled and LRP6 coreceptors, Axin, Dishevelled, and β-catenin. All of these proteins are substrates for GSK3, which is translocated together with them into small intraluminal vesicles located inside multivesicular bodies (MVBs). In this way, GSK3 becomes sequestered from its many cytosolic substrates. MVBs are an obligatory intermediate organelle for the trafficking of activated plasma membrane receptors destined for degradation in lysosomes. The sequestration of GSK3 requires the activity of ESCRT proteins required for the formation of MVB intraluminal vesicles, such as HRS/Vp27 and Vps4, which we found are also essential for canonical Wnt signaling.

Remarkably, the sequestration of GSK3 extended the half-life of many proteins in addition to the well-known Wnt target beta-catenin. Pulse-chase studies with radioactive amino acids showed that total cellular half-life is extended by Wnt3a treatment. Bioinformatic analyses revealed that 20 percent of human proteins contain three or more putative GSK3 sites in a row. This is a much higher frequency than expected at random. Our ongoing studies indicate that GSK3 sites can be predictors of proteins regulated by Wnt. For example, we find that in the presence of FGF, which promotes a mitogen-activated protein kinase that primes phosphorylation by GSK3, Smad4 activity is potently increased by Wnt. This suggests that the transforming growth factor-beta/Nodal morphogen gradient, which is fundamental for mesoderm induction, may be intimately integrated with the FGF and Wnt gradients. Smad4 is a tumor suppressor that is depleted during progression of pancreatic, colorectal, and prostate cancers. The discovery that its activity is not constitutive but rather is regulated by FGF and Wnt may have applications in cancer treatment.

In conclusion, efforts to uncover the molecular basis of embryonic self-regulation have shown that the differentiation of embryonic tissue types is regulated by an extracellular gradient of proteins diffusing between ectoderm and endomesoderm. Studies of basic embryonic patterning mechanism led to the discovery of unexpected connections between endosomal trafficking, growth factor signaling, and protein degradation, which are being actively explored.