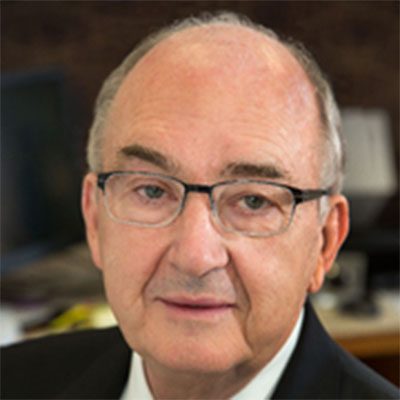 The major goal of this program is to understand how ion gradients drive the accumulation of sugars, amino acids, dipeptides, osmolytes and neurotransmitters in cells. Our approach is to express cloned Na and H driven transporters in heterologous expressions systems and to monitor transport using biophysical techniques. Structure/function relations are explored using mutants and chimeras, and regulation is studied by activating protein kinases. In addition, we are working on a genetic disease called glucose-galactose malabsorption that is caused by defects in the intestinal Na/glucose cotransporter. Patients with the disease are screened for mutations and then we seek to unravel why the mutation causes defective sugar absorption. So far, we have identified missense, nonsense and splice-site mutations, and in the case of the missense mutations it appears that trafficking of the protein to the plasma membrane is impaired. Therapies are being developed to cure the disease.

Ernest Wright, professor of physiology and Mellinkoff Professor in Medicine at the David Geffen School of Medicine at UCLA, has been named a 2005 Fellow to the Royal Society, an honor considered one of the highest accolades a scientist can achieve next to the Nobel Prize. Born in Belfast, Ireland, Wright joined the faculty of the medical school in 1967, and was tapped to chair the physiology department in 1987. His research focuses on the structure, function and genetics of transport proteins, which act as gatekeepers for the body by carrying essential molecules in and out of cells. In 2003, his research team identified a new protein that senses changes in glucose, the blood sugar that fuels body function. The UCLA discovery could lead to the development of new drugs to control diabetes and obesity. I n his 38-year tenure at UCLA, Wright has mentored more than 40 postdoctoral fellows and graduate students. During his career, he received the Senator Jacob K. Javits Neuroscience Investigator Award from the National Institutes of Health from 1985 to 1992, and was named the Walter B. Cannon Distinguished Lecturer by the American Physiological Society in 1989, the G.W. Harris Lecturer by the British Physiological Society in 1990 and a Fellow of the Biophysical Society in 2005. He has served on the editorial boards for several physiology journals, consults for the National Institutes of Health, and is a scientific advisor to the Eli and Edythe L. Broad Medical Foundation in Los Angeles. Wright earned his doctorate degrees in physiology from London University and Sheffield University in England, and conducted his research fellowship at Harvard University in Boston.