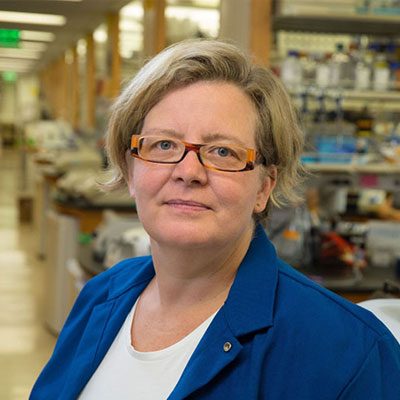 To understand basic principles of gene regulation during cell fate changes and in diseases, we focus on four fundamental problems of mammalian biology that are intimately connected and inform each other:

1. Our lab is studying how one of the two X chromosomes in female mammalian cells is transcriptionally silenced. This chromosome-wide silencing process, called X-inactivation, is initiated when female pluripotent cells differentiate, and represents the most dramatic example of developmentally regulated heterochromatin formation in mammalian cells. X-inactivation is essential for development and equalizes the dose of X-linked genes to that in male cells with their single X chromosome, and leads to cancer if deregulated in the adult. The silencing of the entire X chromosome is orchestrated by Xist, a long non-coding (lnc) RNA. Mammalian genomes encode thousands of lncRNAs, many of which regulate gene expression. While lncRNAs are clearly functionally important, the mechanisms by which they act are still largely elusive. We systematically identify the proteins that interact with Xist, define how Xist RNA spreads along the X chromosome, modifies chromatin states, the three-dimensional architecture of the chromosome and gene expression, and recruits regulatory complexes. Most of our studies are done in the mouse system. Another exciting finding is that the epigenetic regulation of X chromosome dosage differs between mouse and human development. To this end, we have recently established a cell system that allows us to model the human-specific aspects of X chromosome dosage compensation, which also offers insights into early human development. Our findings on Xist RNA and X chromosome dosage compensation are influential for the general understanding of lncRNA function, and guide us in the study of other lncRNAs.

2. We have been among the first to reprogram human differentiated cells to an embryonic stem cell-like state, known as induced pluripotent stem cells (iPSCs), by simply overexpressing four pluripotency-related transcription factors following a strategy first proposed by Shinya Yamanaka in 2006. While it is now clear that differentiated cells can be reprogrammed to iPSCs, the mechanisms by which this occurs are currently largely unknown. An important goal of our lab is to systematically define how the reprogramming factors reset cell identity and determine their interplay with somatic chromatin states and signaling pathways, to understand how cell fate decisions can be modulated. We are particuarly interested in uncovering how enhancers are selected and activated by the reprogramming factors and how somatic cell identity is destabilized by the reprogramming factors. Our work has revealed unexpected mechanisms underlying these processes, which we are now studying further.

3. Another main interest in our lab is to understand the role of the three-dimensional organization of the genome in the regulation of gene expression and developmental identity. DNA is stored in a non-random and highly organized fashion in the nucleus and the 3D-architecture of the genome is beginning to be incorportated in studies of gene regulation. The spatial organization of chromosomes is a fascinating problem of metazoan biology, but many questions have remained unanswered. A particular challenge has been to decipher the mechanisms driving the co-localization of genetic loci and the importance of co-localization. Our goals are to understand how higher-order genome organization is established and dynamically regulated, and how it influences transcriptional networks, chromatin states, and the function of lncRNAs.

4. Finally, we are also interested in understanding how disease states develop. To this end, we are using patient and disease-specific iPSCs to model human diseases and define where deregulation occurs. We are also studying cancer models by defining the cellular heterogeneity and how it develops.

Kathrin Plath earned her doctorate degree in cell biology from Humboldt University (Berlin, Germany) for her work with Dr. Tom Rapoport at Harvard Medical School on how the signal sequence of a secretory protein is recognized by the translocation channel in the endoplasmic reticulum membrane. She did her post-doctoral training at the University of California San Francisco and the Whitehead Institute at MIT with Drs. Barbara Panning and Rudolf Jaenisch and support from fellowships of the Life Sciences Research Foundation and the Leukemia and Lymphoma Foundation. In her postdoctoral research, she uncovered that Polycomb proteins can be recruited to their site of action by long non-coding RNAs, and that this group of transcriptional repressors is important for the maintenance of pluripotency and developmental plasticity through the repression of developmental pathways. She joined the faculty of the Department of Biological Chemistry at the University of California Los Angeles in 2006, where her laboratory studies the gene expression controls that operate during cell fate changes. To decode the genetic instructions that orchestrate the conversion of the single cell zygote into a complex organism and uncover broad principles underlying gene regulation, the Plath lab is focusing on cis-regulatory DNA sequences (such as enhancers), long-noncoding RNAs (lncRNAs), and the three-dimensional organization of the genome. Research in her lab in the past few years has focused on four fundamental problems: (a) Differentiation and reprogramming processes as mean to understand how transcription factors interpret cis-regulatory elements in the context of cellular state and signaling milieu. (b) The function of long-noncoding (lnc) RNAs in the regulation of chromatin and gene expression by understanding how lncRNA-protein complexes form, localize to regulatory targets, and give rise to phenotypic states. To achieve this goal, we currently focus on the X-inactivation process and its regulation by the lncRNA Xist, how the X-inactivation process differs between mouse and human pluripotent stem cells, and how the epigenetic state of the X chromosome influences developmental potency. (c) 3D-organization of the genome changes as a means to understand how transcriptional networks regulate genome organization, and how genome organization influences gene expression and chromatin states. (d) The deregulation of gene regulation processes in disease using iPSC disease models. To accomplish these goals, the Plath lab uses a wide range of approaches including proteomics, genomics, genetics, cell biology, and bioinformatics. Dr. Plath serves on the editorial boards of various journals including Science, Cell, Cell Stem Cell, Cell Reports, and is the chair of the publications committee of the International Society for Stem Cell Research. Recently, she was named a Faculty Scholar of the Howard Hughes Medical Institute.