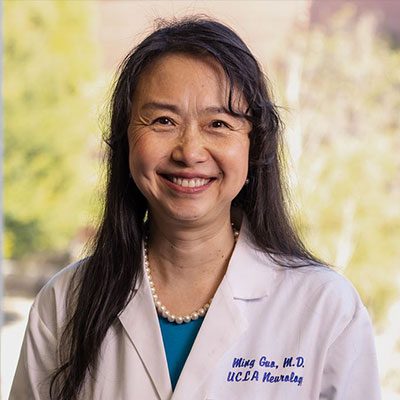 My lab investigates molecular genetic mechanisms underlying the two most common neurodegenerative disorders, Alzheimer’s disease (AD) and Parkinson’s disease (PD), which affect half of the population over the age of 80. We aim to understand the disease mechanisms and to translate the findings into human studies. One key pathological hallmark of AD is the accumulation of amyloid plaques consisting of a toxic peptide known as A-beta. A-beta is generated from a transmembrane protein, the Amyloid Precursor Protein (APP), through the action of two proteases, one of which is gamma-secretase with Presenilins being the catalytic core. Both high levels of APP, and aberrant cleavage of APP by mutations in APP, Presenilin 1 and Presenilin 2, lead to familial forms of AD. We have developed an in vivo reporter system to identify regulators of APP levels and gamma-secretase activities through function-based, genome-wide genetic screens. We have identified multiple enhancers and suppressors of this in vivo reporter, and are in the process of characterizing the functions of these genes. These finding are likely to provide new diagnostic tools and/or therapeutic targets. Mutations in PINK1 and PARKIN result in autosomal recessive forms of PD. We are among the first worldwide to report the function of PINK1, and to discover that PINK1 and PARKIN act in a common genetic pathway to regulate mitochondrial integrity and mitochondrial quality control. This is accomplished, at least in part, through regulation of the mitochondrial fusion and fission dynamics. Recently, we have identified a new gene known as MUL1 that, when overexpressed, suppresses PINK1/parkin mutant-related defects in mitochondrial integrity and tissue damage. When deleted, MUL1 exacerbates defects due to lack or PINK1 or parkin. MUL1 acts in parallel pathways to PINK1/parkin to degrade the pro-mitochondrial fusion protein Mitofusin. Increased levels of Mitofusin are sufficient to cause cell death and mitochondrial damage. Thus, optimizing MUL1 levels is critically important, and both MUL1 and Mitofusin are promising therapeutic targets. In addition to PD, our work also has wide-ranged implications for controlling processes in aging, and other aging-related diseases including other neurodegenerative disorders, heart disease and metabolic disorders.

Ming Guo, M.D., Ph.D., is P. Gene & Elaine Smith Chair in Alzheimer’s Disease Research and Professor at UCLA Department of Neurology, Molecular and Medical Pharmacology. As a practicing Neurologist, she sees patients with memory disorders, neurodegenerative and neurogenetic disorders, referred from both domestic and international sources. As a researcher, her lab investigates molecular mechanisms of the two most common neurodegenerative disorders, Alzheimers and Parkinsons disease. Mutations in PINK1 and PARKIN lead to inherited forms of Parkinsons disease. Her lab is one of the first two labs worldwide to report the function of PINK1, and to discover that PINK1, a mitochondria-localized serine-threonine kinase, and PARKIN, an E3 ubiquitin ligase, act in a common genetic pathway to regulate mitochondrial integrity and mitochondrial quality control. Her work has wide-range implications for controlling processes in aging, and other aging-related diseases including other neurodegenerative disorders, heart disease and metabolic disorders. Dr. Guo is an elected member of the American Neurological Association (ANA), and has received many awards. She is an Alfred P. Sloan Foundation fellow, a McKnight Neuroscience Foundation Brain Disorder Awardee, an Ellison Medical Foundation Senior Scholar in Aging, a Klingenstein-Simons Fellow in Neuroscience, and the Klingenstein-Simon Foundation Robert H. Ebert Clinical Scholar. Her work is also supported by the National Institute of Health (NIH) EUREKA (Exceptional Unconventional Research Enabling Knowledge Acceleration) award. In addition, she was selected to receive the ANA Derek Denny Brown Neurological Scholar Award that is given to one or two awardees each year, and the John Walsh Young Investigator Award, which is given to one Assistant or Associate professor every three years for their research creativity at UCLA. Dr. Guo is actively involved in community service. She is Chair of the Board of Scientific Counselors at the National Institute of Neurological Disorders and Stroke (NIH/NINDS). She also serves as a member of a Blue Ribbon Panel for the NIH/NINDS, the ANA Scientific Program Advisory Committee, the Society of Neuroscience Program Committee, and the Scientific Advisory Committee of the A.P. Giannini Foundation in California.