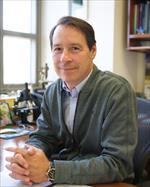 UC Profile
https://labs.dgsom.ucla.edu/tontonoz/pages/
Peter Tontonoz is the Frances and Albert Piansky Endowed Chair and Distinguished Professor of Pathology and Laboratory Medicine and of Biological Chemistry. Dr. Tontonoz received his B.A. from Wesleyan University and his M.D. and Ph.D. from Harvard Medical School. Dr. Tontonoz’s laboratory endeavors to understand regulatory pathways that govern cholesterol, fatty acid and phospholipid metabolism. His work has helped to reveal fundamental mechanisms by which animals maintain cellular and whole-body lipid homeostasis. His group has elucidated pathways for the control of lipid uptake, transport and efflux, and has shown how these pathways impact the function of immune cells and metabolic tissues in both physiology and disease. Dr. Tontonoz is a member of the National Academy of Sciences, the National Academy of Medicine, the American Society for Clinical Investigation, and the Association of American Physicians. He has received a number of national awards, including the Stanley J. Korsmeyer Award from the American Society of Clinical Investigation, the Richard Weitzman Award and the Gerald D. Aurbach Award from the Endocrine Society, and the Jeffrey Hoeg Award from the American Heart Association. Dr. Tontonoz serves on many editorial boards, including those of eLife, Genes & Development, Diabetes, and the Journal of Clinical Investigation.

Obesity, diabetes and cardiovascular disease are the leading causes of morbidity and mortality in industrialized societies. The common thread that links these disorders is a dysregulation of lipid metabolism. A new paradigm for the transcriptional regulation of metabolic pathways emerged with the discovery of nuclear receptors that are activated by lipids. The focus of my laboratory is the regulation of metabolic and inflammatory gene expression and the impact of nuclear receptor signaling on metabolic disease. Work over the past fifteen years has established that lipid-activated nuclear receptors function as coordinators of lipid metabolism, immunity and inflammation. The nuclear receptors LXR and PPAR positively regulate the transcription of a battery of genes directly linked to lipid uptake, efflux and transport, and negatively regulate genes involved in inflammatory responses. Our studies have also revealed new mechanisms whereby cholesterol and triglyceride metabolism impact the functions of immune cells. In addition, we have provided in vivo evidence that the LXR and PPAR signaling pathway are important determinant of atherosclerosis, insulin resistance and immune tolerance. Ongoing work is centered on novel mechanisms by which LXR, PPARs and their target genes regulate lipid and immune homeostasis. These studies are expected to provide insight into fundamental regulatory strategies and may identify targets for therapeutic intervention in diabetes, obesity and cardiovascular disease.

Dr. Tontonoz is Professor and the Francis and Albert Piansky Endowed Chair in Pathology and Laboratory Medicine and Professor of Biological Chemistry. He received his B.A. from Wesleyan University and his M.D. and Ph.D. from Harvard Medical School. His Ph.D. thesis was carried out at the Dana-Farber Cancer Institute and his postdoctoral training at the Salk Institute for Biological Studies. He completed his residency training in Pathology at the University of California, San Diego. The focus of his laboratory is the control of gene expression by lipids and the role of nuclear receptors in lipid metabolism. His major research contributions include the delineation of role of PPAR and LXR in adipogenesis and cholesterol homeostasis, and elucidation of mechanisms of crosstalk between metabolism, inflammation and immunity. Dr. Tontonoz is a member of the National Academy of Sciences, the National Academy of Medicine, the American Society for Clinical Investigation and the Association of American Physicians. He is a recipient of the Richard. E. Weitzman and Gerald D. Aurbach Awards from the Endocrine Society, and the Jeffrey M. Hoeg Award for Basic Science and Clinical Research from the American Heart Association. He is a past President of the American Society for Clinical Investigation. Dr. Tontonoz serves on a number of editorial boards and is a Reviewing Editor for eLife and the Editor in Chief of Molecular and Cellular Biology.