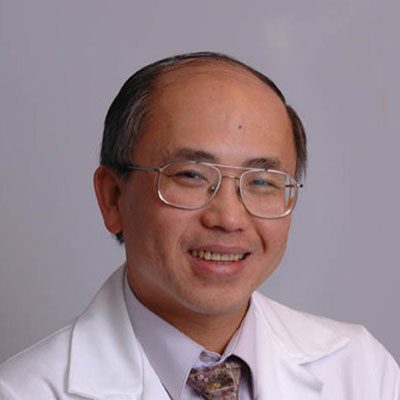 Dr. Lee came to the United States from Taiwan at age 15. He attended a public school in Los Angeles, and received his B.S. degree in Physics at UCLA in 1984. During his college years, he developed an interest in the integration of physics and biology. He decided to pursue his graduate training in Biomedical Physics at UCLA and received his M.S. degree in 1986, under the guidance of Professor J. B. Smathers of the Department of Radiation Oncology. Determined to be a radiation oncologist, Dr. Lee then went on to attend medical school at the Ohio State University. He subsequently chose UCLA for his residency training, because he planned to simultaneously pursue a Ph.D. in Radiation Biology under Professor H. R. Withers. He has recently realized this goal, after years of juggling between clinical duties and academic research. Dr. Lee has always treasured the fact that the clinical practice of radiation oncology is based on the fundamental principles of radiation biology, chemistry, and physics, and depends intimately on advances in modern science and technology. His current research interest is focused on the quantitative analysis of cancer treatment outcome in the clinic, linking to theoretical predictions from basic science in oncology.

During Dr. Lee’s clinical practice, he has had the opportunity to serve numerous Asian American patients. He soon realized the existence of some cancer-related problems which are specific to Asian minority populations. For example, many believe that cancer means death, even for early-stage disease. Most do not appreciate the importance of cancer screening. The ubiquity of alternative medicine is also a serious issue. Dr. Lee believes these ethno-specific problems arise from cultural differences, not merely from the language barrier alone. Since he considers himself bi-cultural as well as bi-lingual, Dr. Lee feels that he is obliged to serve as a bridge, and wishes to enlighten his compatriots with the gospel of modern science. Thus, he has been very active in the area of medical education in the community, participating in free clinics, making public speeches and writing essays about cancer in Chinese. He has appeared on Chinese-American TV and radio interviews, and served as President in the Sino-American Cancer Foundation. He has also served as a voluntary consultant for a Taiwan-based non-profit cancer organization, and contributed as the Asian columnist for a new peer-review journal dedicated to the multi-ethnic aspects of healthcare in America. Recently, he has been invited to Asia repeatedly for academic exchanges (specifically in the Philippines, S. Korea, and Taiwan), and played a significant role in helping his Asian colleagues start their prostate brachytherapy programs.

Before he returned to his alma mater and joined the Department as faculty, Dr. Lee had spent two years in private practice in Downtown L.A. and one year in San Bernardino, serving patients from a diverse spectrum of ethnic backgrounds. He came to realize that there is a need for well-trained radiation oncology professionals and sophisticated equipment in many areas of Los Angeles. Therefore, he decided to return to UCLA with the hope of being a factor in implementing UCLA’s high quality cancer care throughout Greater Los Angeles. Dr. Lee recently was appointed the Director of the Radiation Oncology Residency Program at UCLA. This has given him the opportunity to have a more direct influence in training quality radiation oncologists to serve the community.

Dr. Lee states that he is pleased to be a part of the great American scene, and feels that one of the important lessons he has learned is the need for all of us to communicate and relate to each other. As the world is getting smaller day by day, Los Angeles will serve as a genuine microcosm of the world in this century through its role as America’s newest melting pot. Dr. Lee appreciates very much his current post at UCLA and especially the Department of Radiation Oncology. He believes that much remains to be explored to fully exploit the tremendous potential UCLA possesses as a leading academic and medical institute in the world.